Five lessons from the Americas Cup 2013

The recent America's Cup in San Francisco featured two teams displaying team alchemy of the highest level. The winner, Oracle, displayed an amazing comeback to emerge victorious over Emirates Team New Zealand 9-8 in the best of 17 final, after earlier staring down the barrel of defeat when the score was 1-8.

It was the most competitive (and longest) America's Cup contest ever held. The Cup final featured two evenly matched teams, with budgets rumoured to be over $270m for Oracle and $120m for Emirates Team NZ. Each syndicate was a significant business in its own right.

1. The two teams produced outstanding results, both individually and collectively. 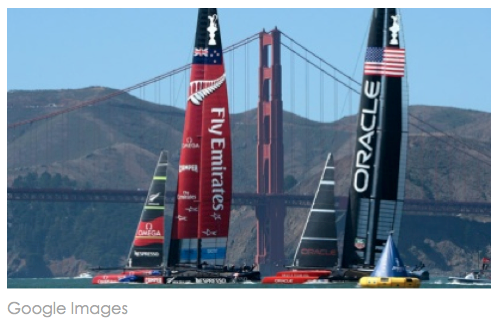 The tone was different for each team with their leaders projecting a different team culture. Publically Oracle's Jimmy Spithill was aggressive, provocative and pugnacious; Dean Barker from Team NZ cool, calm and measured. Each was considered by their syndicate to be an extraordinary team leader who put the team first, ahead of themselves.

As two finely tuned and incredibly evenly matched opponents, they produced arguably the greatest America's Cup regatta ever. That is some (business) result - especially after what had been a series of mismatches and disasters in lead up practices and the Louis Vuitton Cup! (see no 4 below)

2. Each team had highly synergistic relationships, based around the leadership of their afterguard of skipper and tactician.

Team New Zealand had Dean Barker and Ray Davies. Their leadership, combined with polished crew work from the Kiwis gave them mastery of the new technology quickest, producing a performance edge in the early races, and they got off to their fast start to build an 8-1 lead.

Oracle under pressure, and down 1-4, made a key change in their afterguard by bringing in Englishman Sir Ben Ainslie as tactician, replacing a man with the home harbour knowledge (John Kostecki). Ainslie went on to make several key tactical calls in the latter races which, along with improved crew-work (see below) helped Oracle reverse and maintain a performance edge to the finish. Commentators noted the increased dialogue on the boat with Ainslie on board. It wasn't just his tactical judgement but also his social intelligence that helped lift Team Oracle.

Having the right people in the right roles is a huge catalyst for team synergy. Unwavering trust, respect, and belief in one another produces great team dialogue, judgement and decision-making, especially in pressure situations. Oracle improved their team synergy, and thereby their performance, by making a big call to get the right man in the right role - just in time (they actually lost the first two races after Ainslie came on board - even he had a learning curve fitting into the new crew and new role as tactician).

3. Each team displayed the ability to work and learn together. 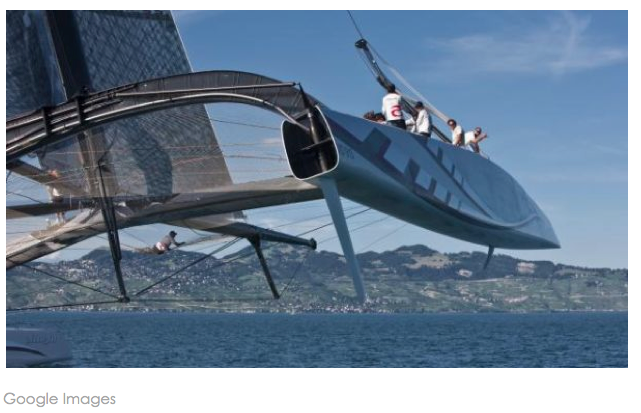 The introduction of a new class of America's Cup boat, the 72-foot high-tech catamarans, demanded innovation and learning from the beginning of the design phase right through to daily performance on the water during the final. Team NZ, through great crew work, learnt to sail upwind and jibe on their foils earlier than Oracle, giving them an initial performance advantage.

"Oracle's lead designer, Dirk Kramers, told Reuters the U.S. based team initially misjudged how fast the Kiwis would be sailing the boat into the wind. Early races were an eye opener and the focus shifted from performance with the wind to sailing into it, which required stabilizing the boat on its foils and a new approach to steering and wing trim." (Alden Bentley, Reuters)

Both teams had the technology to track performance and learn in practice and during their campaigns. Creating time to review and reflect is vital for effective learning. Oracle made a second big call when at 1-4 down it played its "postponement card" to take a 47-hour timeout from racing. This move created time for Oracle to review, reflect and learn as it overhauled its boat, crew and total regimen.

Oracle was able to learn and adapt from the Kiwi's crew work and added their own boat improvements, especially to their stabilization system, to outclass Team NZ in the final eight races. The ability to learn fast and keep learning was a key to each team being so closely matched throughout the series and helped to give Oracle that extra performance dimension in the end.

4.  Innovation was a key success to the America's Cup series, and also key factor in its biggest failures.

In the America's Cup final, the innovative AC72 catamarans were a fabulous success for sailors, syndicates and spectators involved. In the lead up practices and preliminary Louis Vuitton Challenger Series, they were not.

Capsizes involving Team Oracle and Artemis during practices on San Francisco Bay showed the dangers and risks of pushing innovation to the limits, and beyond. The tragic death of British yachting gold medallist Andrew Simpson when Artemis capsized reinforced the danger.

The financial cost of the new class of boat also meant only the two teams in the final were truly competitive, and many potential syndicates didn't even make the start line because of prohibitive costs associated with the innovative designs.

5. We should recognise winners AND have pride in high performance. 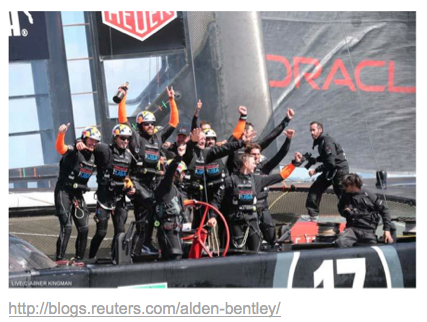 High performance teamwork is electrifying and uplifting for those involved, even more when winning eventuates. It has been heartening to see a maturing of the New Zealand public's attitude to what defines success, and that it is not only 'winning'. The public welcome home to Team NZ in Auckland last Friday was a delight to experience as it was a recognition that high performance teamwork is a joy in its own right and that 'how' you compete is important.

Dean Barker and Team NZ kept its collective cool under great pressure, sailed at its best in the final race when scores were level 8-8, and never resorted to blaming or slagging the opposition. In fact they did just the opposite; treating the competition and their competitors with great respect.

Competing and collaborating on a world scale in sport and business is something that teams, organisations and nations can take pride in. So let innovation and raising the bar of high performance always prevail, as it is an uplifting aspect of the human spirit, resulting in deep fulfilment from working and learning together (although in the Kiwi team's case it may take time to get over the excruciating loss and allow fulfilment to truly reside).

However, in our triumph let us also be wary of the cost that it may bring for some along the way, and seek to innovate and compete ethically, with responsibility and accountability.

In my book both Oracle and Team NZ were high performance teams, backed by very collaborative, high performance organisations. Oracle won and retained the Cup with one of the greatest sporting comebacks of all time; and to me Team New Zealand is an absolute winner by the way it competed, fought valiantly against the steady erosion of its winning advantage, and ultimately faced and handled a devastating defeat with grace.