Today’s blog post, penned by Nic Thielsen in Denmark, is the last in what has been an intriguing four-part series written by members of the European Team Alchemy consultant network over the past 8 weeks.

Nic’s article conveys his thoughts about how the role of a leader must change as a team matures and as the demands of the team change. Nic presents a fascinating argument that no matter how well-performing and self-governing a team becomes, the role of the leader is never completely abdicated; there must always be someone who is ultimately answerable. 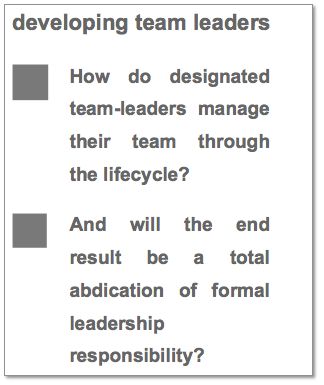 In a recent program on team development the purpose was described as moving towards “self-directing teams”. After the launch, the team leaders of the various service teams felt, that the program was a path towards their complete abdication. “Who would need team leaders when the team was self-governed” was the impression, thereby creating significant defensive attitudes. The immediate solution was to change the headline to “self-governing” teams, but the question is still relevant.

The Team Alchemy definition of a team is:

“Team Alchemy is the state of high performance teamwork that combines outstanding results, synergistic relationships, and deep fulfillment from working and learning together.”

This is the aspiration of the newly appointed team leader, a guiding star for how to create the best environment for performance. This state is approached through the Team Lifecycle, which form a stage-gate model for gradual strengthening of the performance climate.

The essence is, that all through this journey there is a need for leadership, though gradually the role of the leader changes. From being almost 100% focused on the actual mandate and objectives of the team, to gradually shifting towards identifying the complementary opportunities of individual team member’s strengths, and ending up leading the process of reflection and learning in the team.

“Leadership is a process, whereby an individual influences a group of people to achieve a common goal” – however, leadership changes with the different stages, as the team matures along the lifecycle.

The main focus is to set the team up for performance. Aligning the team around the mandate, getting the emotional commitment to collaborate with trust and respect towards thoroughly accepted goals is the platform. In Stage 1 the leader is assuming a quite directive role, primarily as a conduit to the mandating level of the organisation.

Once the team is aligned and committed, the focus for the leader is to establish team dialogue processes – initially for learning how to perform as a team. A very important aspect is to invite the stakeholders outside the team into the dialogue – and in the learning process ensure, that the external inputs are used to learn and adjust. The external collaboration begins with mapping expectations from all stakeholders and decide potential adjustments to the mandate and team objectives.

At this stage the team roles are emerging through shared insight into individual skills, experiences and personal strengths. This process is only effective when done in a climate of straight talking and openness. The Leader orchestrates this, as the situation moves from being very task oriented to be more people oriented.

Having established a solid platform for team performance in stage 2, the focus should be on ensuring that this performance is delivered consistently, and making certain the opportunities for improving are captured and acted upon. The leader moves into a less task-focused role, and leads through feedback in reflection sessions. This stage is enabled by the leader insisting prioritizing time to monitor performance metrics, and inputs from collaboration externally. We have experienced teams so busy performing, that meetings with a learning agenda are seen as a waste of time.

Now the leader has the role of ensuring everyone’s participation in the teams’ development process, and are open to suggestions and inputs from each other. Moving into the momentum stage, the leader will focus on gradually shifting from leading to facilitating, as the team matures and confront reality as a matter of fact, and without defensive attitudes.

Consistently high performance and high learning characterize this stage. The task and people focus is very much an ingrained habit in the day-to-day operations. The leader is ensuring that successes are celebrated and newcomers brought up to speed effectively.

Even though the team is more or less functioning as an integrated entity, the role of the leader is never in question. Task leadership shall revolve with changes in skills and experience needed, where direction setting is facilitated by the most capable team-member in that specific situation. However, overall leadership remains with the designated team lead.

The essence of the team leaders role – as team leader – is to enable the team to move through the lifecycles effectively. The leader may also perform the role of subject matter expert, and as the team matures, it will be important for the team lead to reflect on which role they act on in any given situation.

Should the team at any given stage and time begin to falter and fail to meet performance criteria, it’s the team leaders responsibility alone to decide if a team reset is needed. This means altering the composition of the team, revisiting objectives and processes. It’s not a decision taken lightly, but on the other hand is absolutely necessary in situations where the team looses faith in its own ability to achieve the Team Alchemy stage.

Nic Thielsen has more than 25 years of consulting experience. Based in Denmark, his career has been spent both in globally operating consulting companies and within HR teams. His special areas of interest are Matrix organisations and changing company cultures.