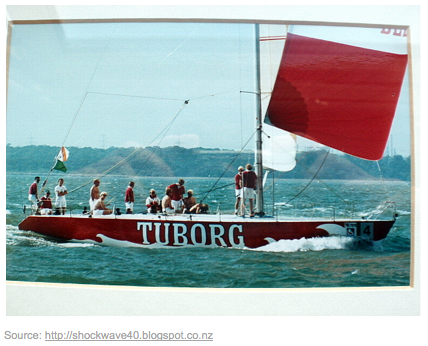 During the late 80's and early 90's I was part of the Danish sailing team with big ambitions. We wanted to win the Admiral's Cup (the World Championships for ocean racing keelers with 10 man crews) and match our skills against the best sailors in the world. It took ages to get the right people on our boat, and the first year we had frequent changes in key positions - we were uncertain who should do what job. Then came a period where we thought that winning was all about having the newest, high-tech equipment, and believed that the reasons for not winning were caused by having a mediocre boat-design, with inferior sails.

It wasn't until after a couple of seasons we realised, that the boat was probably better than the team who sailed it. This launched a whole new approach, with rigorous training on the water, perfecting manoeuvres, and synchronising our crew work. Team synergy emerged from building complete trust in each other's abilities, clarity around our roles, and fine-tuning our crew interdependencies.

Results began to improve, and with better results a vastly improved team culture emerged. Rather than blaming each other, the world, and the weather around us for causing us to be behind in a race, we shifted to constructive dialogue on what would be needed to lift our game during a race. Instead of opinionated inputs on how others should do their jobs, we simply provided factual observations to each other on what was happening. That way, the crew member who owned a particular role (e.g. the mainsail-trim)  had 10 pairs of eyes to observe impact of changes, rather than 10 opinions on what they should do to improve speed or wind-angle.

When we finally went to the top of the fleet, the most interesting observation was that it felt easy - and that things worked for us rather than against us. It seemed almost as if we had surplus energy all the time, and we actually discussed how it could be, that it was so easy now, compared to all the struggles we had had previously.

We had built team alchemy - by consciously working ourselves through the phases of  team performance.

The point is, that the learning cycle has to be travelled - together as a team. The outstanding results did not come until we really faced the fact that the failing factor was the team, and not the equipment or lack of luck. Once this shared understanding was emotionally accepted, the really hard work began. Perfecting processes and building a culture of collaborative support did not emerge on its own, and what kept the energy high was the constant improvements we experienced and celebrated.

In comparison to a business situation, the most important piece - besides the individual accountability for the team's performance - was the training effort we put into the program. As I see it, this was the game-changer, and is what business teams in all shapes and sizes need to include in order to reach the state of high performance teamwork.

Sports teams by the nature of their competitions separate preparation- training - performance - review, and then repeat the cycle many times over during a competition , season or over series of competitions and seasons, as we did with the Admirals Cup. Consequently (effective) sports teams improve and evolve.

Business teams can benefit from replicating the sports teams performance cycle  by building a Plan - Do - Check - Act cycle into their weekly, monthly and quarterly meetings.  The challenge is creating the time, focus and disciplines to do this consciously, and well, in a consistent manner so that the business team improves and evolves into a high performance state, just like the best sports teams.

* Guest blogger Nic Thielsen is a former international sailor from Denmark and a Master Facilitator-Coach in our European Team Alchemy network.