During the month of March I am spending the majority of my time working in Australia. During this time I have been an enthralled observer of the recent tussles and power struggles playing out across the Tasman in the halls of Australian parliament. What a debacle the Labor government has created in a public feud over leadership of the party that at times has been awkward and poorly played out.

Prime Minister Julia Gillard’s victory over (challenger and former PM) Kevin Rudd by a count of 71 votes to 31 was the eventual result of a Labor Party ballot. However, what we watched in the lead up to that outcome was a public broadcast of backstabbing, mud slinging and undermining of the two Labor top dogs.

Politics is often full of military styled terminology and analogy, and it has been said a couple of times during Rudd’s leadership challenge that the whole episode has been an exercise of “mutually assured destruction”. The suggestion being that it is irrelevant who won the battle in the end, because the fight itself would erode all credibility of the Labor party, and belief in the party’s leadership. I agree wholeheartedly with this assertion.

At ETC, as many of you know, we define the ultimate state of teamwork as “Team Alchemy”.

A critical part of our Team Alchemy model that warrants examination in relation to the Gillard/Rudd chapter of Australian politics is “Trust & Respect”. It is an extremely interesting exercise to read about the respective leadership styles of Julia Gillard and Kevin Rudd, how they treat their teams, and the resulting environment they have created amongst the Labor party in Australia.

Egotistical, autocratic, disrespectful, arrogant, abusive and a micromanager… some of the harsher terms used to describe Kevin Rudd during his time at the helm of Australia.

A foundation of successful teamwork is trust. The establishment of team trust and respect commences with learning about “who” is on our team. Respect, trust and belief grow from knowledge of colleagues, who they are, and what they bring of value to the team.

Without creating an environment of openness, trust and respect, it is very difficult to establish Team Alchemy.

The truly sad thing about watching what has played out between Gillard and Rudd over the last few weeks is that both of them purport to make decisions in the best interests of the nation, as a leader of leaders within parliament. I fail to see how either of them, if their character judgements as portrayed in the media are accurate, can hope to run a successful government, simply because neither of them will be able to foster trust and respect within the Labor party.

In this article of June 2011, it is described how Kevin Rudd, during his time as Australian PM, routinely degraded and abused his parliamentary ministers. It was said that he was unable to trust in the abilities of those around him, was a chronic micromanager, and did not consult with his teams and advisors when making decisions, preferring to operate individually. While Rudd enjoyed high ratings in popularity with the voting public, he was able to get away with these habits. However, once his star began to fade with his constituency, the stirrings amongst those beneath him began to gather energy, and ultimately led to his uprooting by his then second-in-command, Julia Gillard. Team members, and especially leaders, must have a good knowledge of their colleagues, who they are, and what they can contribute to the group and members must feel as if their contributions are valued, and recognised by the team.

In different ways, it seems that Julia Gillard has also been unable to institute an environment of trust and respect within her government. Media reports speak of Australia’s first female PM as being disengaged, and not having the skills to pull together the collective efforts of her ministers. Whilst she may not directly attack her team members as Rudd is accused of doing, it seems Julia Gillard is unable to promote a setting where her colleagues feel valued and respected. When reading summaries of her leadership style, a common picture that is painted is of a leader who regularly goes back on her word to her voting public and also to her ministers. It is also commonly said that her teams do not gel together, and that there is no collective strategy to be followed, with team members working in isolation. Given all this, it is not surprising that Gillard found herself having her position at the helm of the government contested.

Politically speaking, the big winner from the Labor party fiasco has been Tony Abbott and the Liberal Party. They have been able to sit back, keep quiet, and watch while the Labor government sabotage their own future. Without needing to even fan the flames in the slightest, the opposition must scarcely have been able to believe their luck as they watch Gillard and Rudd burn down their own house. 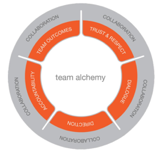 So what can we learn from this chapter of infighting and power broking? No team can function at all, let alone at a state of high performance, without trust and respect amongst team members. Leaders need to ensure colleagues understand each other, understand what roles and talents each individual brings to the table, and that their contributions are valued and recognised.

A very interesting quote from John F. Kennedy that was part of a speech he was due to deliver, but didn’t live to do so:

"Leadership and learning are indispensable to each other"

Julia Gillard has survived the most recent leadership challenge to the office of Australian Prime Minister. Despite this, she has surely played her part in eroding the public’s trust and respect of the Labor Party to the point that they are likely to be trampled in next year’s election.

If Tony Abbott is a smart man, he will heed the advice of John F. Kennedy above, learn from the mess Gillard and Rudd brought upon themselves, and make sure that his Liberal Party is characterised by both trust and respect, and thus have a chance of functioning optimally in leading Australia.