Today’s blog post is the first in a four-part series written by consultants in the European Team Alchemy network.

The article is written by Liz Keene who specializes in helping businesses attract, develop and retain their Gen-Y talent.

Her paper “The Generation Game” analyses how Team Alchemy can be used to help cross-generational teams to work together to achieve a state of high performance teamwork.

Are there differences in how younger employees relate to team working? 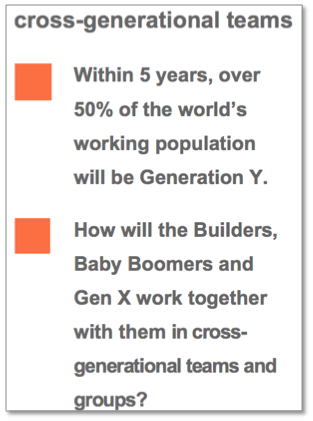 By 2018, over half of the working population of the world will be made up of Generation Y* talent. Globally connected, tech- dependent and geared up for portfolio careers, these workers are already making waves in organisations around the world. But what of the Builders, Baby Boomers and Gen X workers who blazed the way and remain a key part of the success of our businesses? How are they dealing with this influx of young talent? And how will all four of them work together to achieve commercial prosperity?

In many organisations, teams are created based on ‘process factors’ – e.g. who is available, where they are located etc. etc. – often resulting in a group of people tasked with a project that they aren’t necessary a) best skilled to complete or b) particularly engaged by. Now – add on to that, the fact that this group of people are joining this team with their own agenda, attitude and ‘generational baggage’ and we have a recipe for an ineffective, unmotivated group working to achieve an externally set goal. Not a great foundation!

That’s where the Team Alchemy framework with its six elements (as well as its internal and external focus) allows us to work with clients to get their cross-generational teams on track and motoring along.

A recent conversation with a client highlighted to me the challenge some Boomer workers find when working with Gen Y talent. “They really need me to care about them, to have that emotional connection with them. Not like in my day when we came to work and did what we were told – it’s a real need on their part for respect. Maslow might have had a point back then, but now young talent expect so much more than the basics in order to perform”. Teams scoring low in this area will have demotivated Gen Y’s (who will probably already be looking to move on)

Gone are the days of hierarchical briefings – for Gen Y’s, the key to getting them performing their best is letting them take part in all discussions from day one. They want to know why they’ve been tasked with a particular job, how it will impact the wider project and everyone else’s outputs. A cross generational team scoring low on Dialogue will be an unhappy place for Gen Y talent who will feel disengaged.

I hosted a research evening where a group of Gen Y’s got together to talk about their hopes, fears and work life frustrations. Top of the agenda = not knowing where they were headed. One young woman animatedly recalled a recent development conversation with a manager. “She couldn’t (or wouldn’t) tell me what she thought we’d be doing in 6 months’ time. I know she knew because she has to sign off budgets and client projects – but for some reason she was keeping us guessing – as if dangling the carrot would keep us interested”.

And the result? That young woman had left by the end of the month.

Gen Y have a ‘tribal mentality’. Don’t expect them to keep anything a secret (that’s right, they discuss pay reviews even if they promised they wouldn’t!). What they are very good at, however, is asking for responsibility. Gen Y’s strive when a project’s success criteria’s are clearly defined and each team player knows their role. A team scoring highly here will have some highly motivated Gen Y talent within it.

Everyone wants to be on the winning team – and no more so than Gen Y. Fiercely competitive, (much more so than their Gen X managers), Gen Y are known for their ruthlessness and team spirit when in ‘battle’. Not Everyone Deserves A Trophy**, discusses the cause of Gen Y- isms, and describes a parenting and educational black hole where Gen Y’s have been so over-awarded for their efforts (every Gen Y won something at school sports day!) that they now expect praise for simply showing up. And it’s true – they do like praise. But they also love the idea that they’ve won it....over someone else.

The final element really is the key to the success of a high performing cross-generational team. Too many teams are under-utilising themselves, simply by not considering their approach, their skill sets and their differences/similarities in communication styles and preferences. Too often a team works together – but do they really collaborate at all? Or are their underlying issues hindering their project progress and self-fulfilment?

The sheer size of the Gen Y work force means that most, if not all, teams in modern businesses are cross- generational, meaning that

some of the issues outlined above are likely to be occurring in your business right now. Are they? There are, of course, other tools on the market – but the key element from TA for Gen Y is the idea that the team is considered as a full entity. Gen Y’s don’t want to be given a personalised profile that puts theminabox–butiftheyare able to be part of a team’s self-diagnosis, with no blame game, no individualised targets – they will reveal their full potential: highly engaged, focused, competitive, commercially minded and globally connected.

Finally, the power of a well- executed TA programme allows not just for a company to adapt to Gen Y (as lots seem to think is the only option), but it challenges Gen Y talent to adapt their own style to that of the business they’ve chosen to join - working together, rather than against, the other generations. The perfect ingredients for a high performing team? = age, maturity, experience and knowledge combined with energy, enthusiasm, stamina and technical ability.