Third in a four-edition series of blogs written by our European Team Alchemy consultants, today features a perspective paper written by Kate Cantellow in the UK. Kate's “Project Excellence” article examines an issue which is becoming increasingly prevalent in the modern day workforce; how to overcome the unique challenges posed by ‘project teams’ and reach levels of high performance and collaboration within those teams. 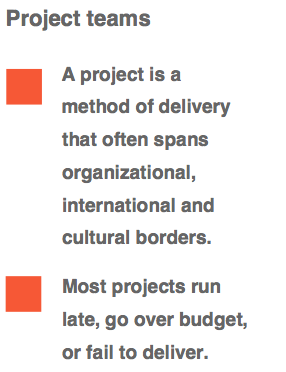 Increasingly, more and more teams are ‘virtual’ teams – very often, they are project teams. They may be geographically dispersed. They may need to collaborate using communication technology, rather than in person.

Project teams usually have to mobilise very quickly and have a set time, budget and resource pool from which to deliver a defined outcome. The initiation phase is not always clear, however, but for both the more and the less well-defined projects, the one thing they have in common is that the project needs to reach a position of high performance quickly.

So, what makes the difference between those projects that appear to hit the ground running and those who seem to be lacking any real delivery even after weeks or months of reported activity?

The key differentiator is the people who are delivering the project: the project team. The project team is most often a temporary, ‘virtual’ team and may range in size, experience, ability. Most challenging, it is likely to have to work across cultural, organisational and, sometimes, international boundaries. In such scenarios, the key is to kick the project off to a ‘fast start’ and emphasize the key skills around collaboration.

This is where the Team Alchemy framework with its model and life cycle can position the team to negotiate the early phases particularly quickly and then sustain high performance through continual evolving.

Going through the lifecycle

Projects on a tight timescale need to transition through the TA lifecycle quickly and reach the high performing productivity stage of team alchemy as soon
as possible. This involves going through from team traction, team calibration and team momentum swiftly and efficiently. Long projects, which go on for over a year, often do need a team reset during their plan, if they start to slump. In my experience on long projects, it is good practice to swap a couple of the key players in and out, even the project managers, as a project moves through phases of its delivery. Some are better at start up, others at finishing. Some of the key members will, and need to, remain the same, while new comers can bring in fresh ideas and enthusiasm, to bring renewed energy.

Getting off to a Fast Start

Team traction is about setting the team up right to ensure a fast start. Trevor Laurence, the creator of TA, has identified 6 steps for a fast start and these are very appropriate for project teams:

1. Team composition and casting - get the right people in the right roles.

2. Look out to look in; lay the foundation for collaboration.

4. What’s the score? Build a team dashboard and ‘team-first’ attitude.

6. Make accountability a team discipline from the start.

For a project to hit a fast start one of the key activities during the kick off, is the identification of team roles, which is sometimes defined with individual work packages. If you know what your role is, you know what is expected of you, your sphere of influence, your level of empowerment; you know what is expected, and what the other people are doing. Effort is not wasted. When roles and responsibilities are not understood across the whole team, it can lead to feelings of frustration and a lack of personal job satisfaction. At times, the suitability and eligibility of the team members is not the best fit on a project. Where this happens and there is no choice of resource, adjust the team so that the roles are covered and the objectives delivered.

If possible, arrange for a disparate, virtual team to meet once face to face at kick off. Sophisticated web meeting software can be used to work as a project team across the miles. A tough one sometimes, but give trust unearned. Also, the team members must respect one another and talk straight with one another.

Collaboration – look out to look in

No matter how good the team feel they are performing, unless they interact with and seek feedback from their stakeholders, then they will fail to deliver within their time, scope, quality or budget.

Most project management training will advise you to identify your stakeholders and create a communication plan using a stakeholder mapping tool. They may be your customer (internal or external) your sponsor, (internal or external), the manager/owner of the resource you need or those who you are dependent upon for a successful outcome. They may support your project, oppose it or be ambivalent.

When Team Alchemy talks about Collaboration, it is doing all of this, but also really taking time to understand your stakeholders – walking a mile in their moccasins – finding out what their priorities and constraints are, and importantly what a successful project looks like for them. Only by doing this, can you look out to look in and really deliver a successful project within the constraints of your business case.

It should go without saying that having clearly defined outcomes is a given with project delivery. However, the objectives may not be clearly understood and communicated. Align the project team and make them clear on the project’s goal. Set that strong direction through agreeing shared goals and objectives, which facilitate action by clear decision making.

When adhering to a robust business case, a project is delivering measurable benefits. If planned well, the project will have scope, financial, and time milestones as it progresses. The project’s progress against these targets is its score card which can be used to benchmark high performance standards to focus team effort.

The best run projects have clear channels of communication, be they weekly project meetings or shared data storage. Structured and purposeful, they can demonstrate the soft skills of team working and stick to a process, where meetings are productive and focused on the outcomes.

Encourage the constructive use of tension. Tensions between say a designer and a support engineer could be transformed into creating the “third alternative”; innovating a solution better than either polar point of view could have achieved on their own. Value different perspectives and insist on a robust process for dealing with issues.

Being in a high performing team is about setting high standards and delivering on commitments. Along with having the right people in the right roles, a project team’s success also lies in individual accountability. Linked with the other elements in the TA model, this is where performance standards across the team are applied and team members deliver on commitments.

For me, the best and most motivating aspect of being in a high performing project team is the social experience. When the individuals in the project team are really enjoying being part of that team, then the performance naturally soars. Alongside the hard work, the passion, the innovation and delivery of working in a high performing team, there is banter and there are laughs – even across continents using communication technologies. Being in a high performing project team is great fun. I learn from my team members and they from me. Not only that, though, the team itself improves as a result of the work it undertakes as a unit. This is how the project team evolves and its performance increases continually. The team really is bigger than the sum of its parts, as is its ability to innovate, (as each member develops from the other), is greater than each could create alone. Every feather on the eagle helps it to fly – let the eagle soar.

Kate Cantellow has made a career from delivering large projects and programmes through high performing teams. An NLP Practitioner, she is a coach, facilitator, executive speaker, and management consultant in the field of personal development, leadership development and personal excellence.