In 1973, Pink Floyd released an album entitled Dark Side Of The Moon. It was to become the band’s signature album, sell more than 50 million copies and remain in the charts for 741 weeks, longer than any other album before or since. Roger Waters, David Gilmore, Rick Wright and Nick Mason went on to become legends in the world of rock n’ roll.

In January of 2012, Walk Off The Earth released a (cover version of someone else’s) song on Youtube, featuring the entire band of five members playing just one guitar. The largely unknown Canadian band has since been viewed more than 80 million times. Despite this success, Ryan Marshall, Gianni Luminati, Mike Taylor, Joel Cassady & Sarah Nicole Blackwood are not likely to become musical icons of their generation as Pink Floyd did 40 years previously.

So to what can we attribute the phenomenal success of Walk Off The Earth? Bearing in mind the title of this post is “Collaboration: Five People, One Guitar”, please watch the amazing video below and collect your own thoughts: 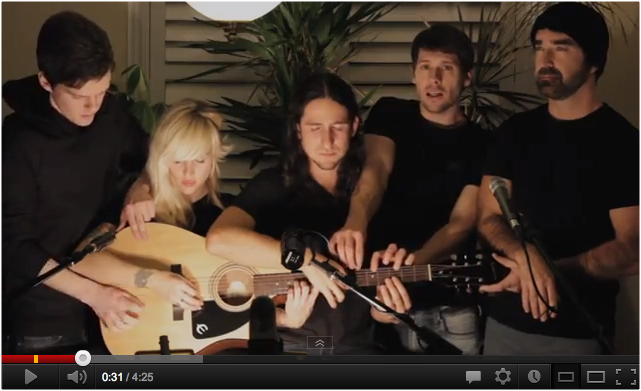 A testament to what can be achieved when people pull together and pool their talents in a harmonious fashion. A shining example of the power of collaboration. Or is it?

In our Team Alchemy system we define collaboration as having three key components:

In his book Collaboration Morten Hansen defines the practice as taking place “when people from different units work together in cross-unit teams on a common task or provide significant help to each other.”

Team Alchemy says that even the smoothest internal team dynamics and interactions are ineffectual unless there is an underlying focus on the end user and how to connect with them. In order to provide the ultimate end result, teams will need to interact effectively with external stakeholders, players who are separate from their own internal team interface. Walk Off The Earth certainly had a strong external orientation. They knew what their Youtube viewers would be entertained by, and connected with them. 80 million Youtube hits attest to that.

What does it mean to proactively engage with key stakeholders? In order to become synergistic, performing optimally, teams must have a clear understanding of other teams’ needs and requirements of them. When this is taken into account, it ensures that teams are able to work interdependently, utilising their own unique talent pools, safe in the knowledge that what they are doing will contribute harmoniously with the other teams they are collaborating with. Essentially, proactively engaging with stakeholders is about the left hand talking with the right hand before they go to work.

Team Alchemy also recognises that teams who are collaborating effectively will operate a management system whereby they can identify their key milestones throughout the project, track progress against appropriate data, and refine goals where required. Care must be taken to ensure that meetings and reviews are structured with the ultimate goal always being: how do the actions of my team correlate with the actions of my collaborating teams, and how does it all contribute to the desires of the end user? There is little use in sub-teams reviewing their own performance in isolation, no matter how polished they may be. Teams can always benefit from the integration of ideas and inclusions from their complementary units. Therefore, how each team is collaborating together is monitored in a systemised way, utilising formal feedback loops.

Taking all this into account, is Walk Off The Earth’s phenomenal piece of music also a brilliant piece of collaboration? Without taking anything away from their stunning cover of Gotye’s original song, I would say no.

Often in colloquial language, collaboration is confused with many other things. In this instance, I would say this is a great example of effectual cooperation, but not primarily collaboration. In researching the video, I was amazed to discover that it took 26 hours and 14 takes to pull off without a mistake. Whilst this is astonishing, during those 26 hours, even though the band worked with the end customer (Youtube viewers) in mind, the process did not really involve great collaboration between complementary teams. Nor was it monitored throughout by disciplined use of feedback loops. It is really an independent piece of teamwork rather than a collaborative effort between complementary or interdependent teams.

To me, this is an illustration of how sometimes when working in teams, we can believe what we are doing is collaborative, when in actual fact it isn’t. True collaborative efforts rarely just happen, teams must make a collective effort to adhere to the Team Alchemy principles above if they wish to add positive value to the shared outcome.

As an interesting side point, have a listen closely to the first 30 seconds of the video again, and see if you can hear which popular children’s nursery rhyme the song has been “borrowed from”!