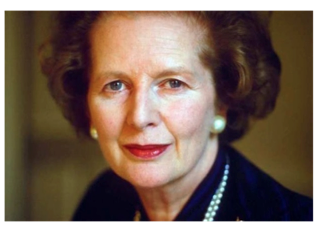 As the world digests the news of the passing of one of history’s most celebrated political leaders, brickbats and bouquets are flowing across the U.K. to Downing Street and Buckingham Palace in London.

As England’s first female Prime Minister and the first female leader of a major Western world state, Margaret Thatcher is an iconic symbol of Great Britain. The longest serving British Prime Minister of the 20th Century, Thatcher was also a divisive leader, whose policies and actions polarised a nation for eleven years from 1979 to 1990.

As a New Zealander I lived through and followed Margaret Thatcher’s leadership from the far side of the globe, and saw it close-up as a postgraduate student living in England in 1983. As I arrived in England for my postgraduate studies the British fleet arrived back from the Falklands War, and I remember being intrigued by the steely resolve of “The Iron Lady” and the response of my friends and colleagues at university. In what was to become a defining characteristic of her leadership and her public persona, Margaret Thatcher seemed to me to be a woman with an intense and burning ambition to realise her visions for a better England.

Much has been written about Margaret Thatcher in the days since her passing. Unsurprisingly, the reflections on her life and achievements are as diverse and polarised as they were while she was alive. I do not want to enter into debate about the merits of Thatcher’s time as Prime Minister. However, her passing is an opportunity to look back on one of the most impactful periods of political leadership seen on the global stage in the 20th century.

Above all, Margaret Thatcher always struck me as a woman with a strong action orientation. She clearly had a very well defined vision for her nation, and operated with purpose in striving to attain that vision. Once she had decided on a course of action – whether it was a policy, a method of negotiation, a challenge to her beloved nation's security, or a response to a crisis – Margaret Thatcher set high standards for herself and her colleagues and consistently displayed an exemplary commitment to execution. I recently read an interesting anecdote which succinctly demonstrates Thatcher’s task-management, results-focused attitude:

Recalling the Brighton bombing, (the IRA’s bombing of the Conservative Party conference which killed five and injured many) ex-Tory Minister Lord Deben told how he found Lady Thatcher on her hands and knees, peering round a door. He said she dusted herself down, before saying: “Right, we’d better get on with something.”

Two of Margaret Thatcher’s extraordinary leadership strengths were her uncompromising and obvious drive combined with her clarity of vision. The Economist described her visionary conviction whilst she was campaigning for her third term in power:

"In her clear vision of the Britain she wants to create, Mrs Thatcher is unlike any of her predecessors. She is, in that sense, a revolutionary. It is a role which she stumbled upon almost by accident, an aspiration which has become more compelling with every passing year. Not only does she believe that she alone sees the reforms that still need to be made. She has a shrewd suspicion that much of what she has achieved could be reversed if she were now to leave Downing Street."

Vision provides a roadmap and defines the destination. Thatcher was an almost textbook example of an autocratic leader, and it was through her extraordinarily strong character that she led her Cabinet, and country, along the roadmap towards converting her vision into reality. The label ‘autocratic’ is classic leadership terminology, however its application is fitting when referencing Mrs Thatcher. In many of the ‘watershed moments’ during Thatcher’s career she demonstrated classic traits of an autocratic leader. In confronting the Falkland's situation, in her refusal to compromise with either the IRA or the Miners Union, and throughout her process of privatisation Margaret Thatcher exhibited several of the key attributes of an autocratic political leader…

• Came into power at a time of crisis

• Clarity of thought and communication of a solution for the crisis

• A compelling vision for the future - for her party and followers

• Minimal input from her key constituents, but strong buy-in and follow-ship from a passionate group of supporters

• A polarisation of the general population

Perhaps Thatcher’s autocratic style of leadership is best summated through her own words:

“I don't mind how much my Ministers talk, so long as they do what I say.”

Many say that Margaret Thatcher left little chance to ‘like’ her – that through her “Iron” personality and conviction she polarised people to such an extent that she was either ‘loved’ or ‘loathed’. Personally, as an intrigued student of leadership I ‘liked’ watching Thatcher’s career. As a leader she was truly unique, unafraid to fight and take a stand for the vision which she had for a better Britain. During her time in power Thatcher commanded professional (though not always personal) respect and belief through action from her Cabinet and colleagues through her unwavering commitment to action and by setting high standards.

In standing alongside Churchill as one of Britain’s pre-eminent politicians, at a time of crisis for her nation, Margaret Thatcher’s legacy has been to leave her England, and the political and economic landscape of the world, in a vastly different form than she inherited it. Whether or not it is a better England or not depends on whom you speak to. However, what is unquestioned is that last week the world lost one of its great and unique leaders, who will be remembered for her vision and drive to realise it.

“Unless we change our ways and our direction, our greatness as a nation will soon be a footnote in the history books, a distant memory of an offshore island, lost in the mists of time like Camelot, remembered kindly for its noble past”.

(As a leader Thatcher was able to incite emotion and opinion like few others. If you have any thoughts about Margaret Thatcher’s style of leadership, as always I’d love to hear about them below in the comments section.)

What The Economist Saw: http://www.economist.com/blogs/blighty/2013/04/margaret-thatcher-1.